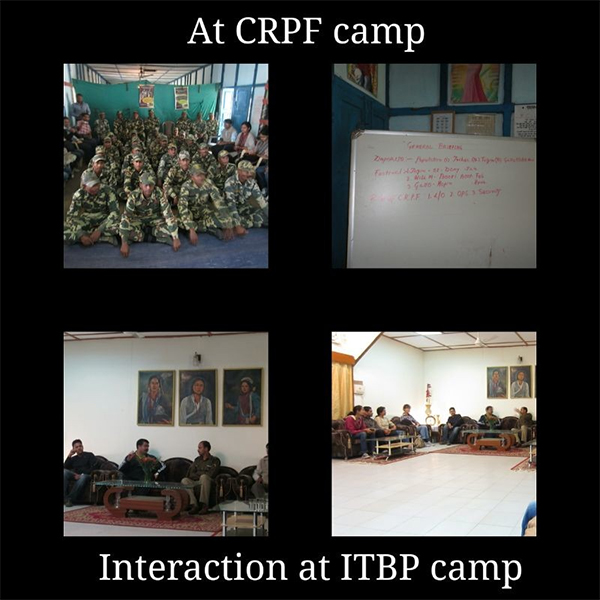 December 2011, The Academy had organized a study trip to Arunachal Pradesh and had arranged for three important field visits to the Indo Tibetan Border Police (ITBP) Battalion stationed at Kemen, the Central Reserve Police Force (CRPF) station in Daporijo and the Subansiri Hydro Power Project a few miles from Daporijo, all located in the Upper Subansiri District.

The ITBP visit : The first field visit of the trip was at the 10th Battalion of the ITBP stationed at Kemen. The visit included a one-to-one interaction with the officers posted there, along with the Commanding Officer. The study groupwas also given a presentation mainly with regard to the history of the ITBP, its achievements and failures and the ground problems faced by the soldiers. They also elaborated on how crucial it is for the civil and military administration to cooperate and coordinate with each other to facilitate better efficiency and make it easier for the soldiers. Following the presentation was a weapons display which showcased the variety of arsenal, including ancillary devices, that is at the force’s disposal.
The CRPF Camp visit : The next visit was to the CRPF Camp posted in Daporijo. The primary objective of the CRPF is to check insurgency and contain Maoism/ Left Wing Extremism. Here, too, there was a direct communication with the soldiers and the officers. A similar presentation was organized by the CRPF, sans the weapons display. The presentation focused on the CRPF’s history (reasons for formation etc), its areas of concern, its achievements and failures and the difficulties they face on the field, both with regard to the insurgents/Maoists and the villagers they try to protect.